Athletes from all over the world faced off in Rio de Janeiro, Brazil for the 2016 Paralympic Games, and volunteers from the Mid-Ohio Valley were there to help!
A goal set in 2012 came to fruition four years later when Mark and Nancy Miller of Miller Prosthetics & Orthotics volunteered in the 2016 Paralympics. As a Certified Licensed Prosthetist, Mark Miller offered his services in the 1996 Paralympics in Atlanta. This time, against all the risks and warnings, they both made the trip to Rio. The volunteer process involved an online application, skype interviews and online training courses. Once selected as a volunteer, the company “Rio 2016” then assigns each volunteer a role and venue, and assigns a work schedule that can be accepted or rejected by the applicant. Volunteers must be willing to serve for ten days. 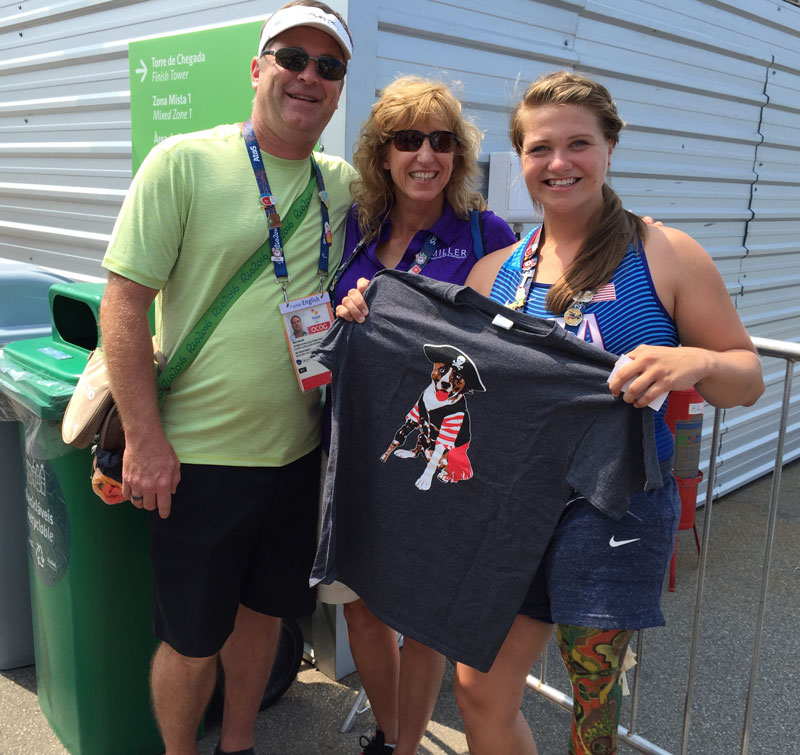 Mark and Nancy give USA Paralympic Kayaker Kelly Allen a Keating Pirate Shirt after her race!

Nancy headed to Rio solo since she accepted her month long schedule, which included time before and after the games. The Paralympic Games ran from September 7- 18 and followed the regular Olympic games. The Opening and Closing Ceremonies were held at the same Maracanã Stadium as the Olympics, and the event venues and Paralympic Village were all held at the same places the Olympics occurred. Olympic Park, Athletes Village and other stadiums were built for the Olympic Games. New highways, subway lines and a new BRT bus system was also developed for the games but will also benefit the people of Rio.

The International Paralympic Committee (IPC) is responsible for the Paralympic Games. They work together with the National Paralympic Committees (NPC) from each country. The International Federation of Sport (IF) has a leader in charge of each sport. Together the leaders of these groups make up the “Paralympic Family.” Nancy and Mark both worked in the International Relations department and the Paralympic Family Members were their clients. Nancy worked at the Paralympic Help Desk in the lobby of the Windsor Barra Hotel, in Barra da Tijuca neighborhood of Rio. Mark worked at the Tennis Venue at Olympic Park, which was also in Barra da Tijuca, but required an hour travel time between the BRT bus system and the long walk into the park.

Nancy received her assignment first, so she found an apartment next door to her work location, which happened to be across the street from the Barra da Tijuca beach. The location was fabulous. The ocean and the beaches are scattered with breathtakingly beautiful granite mountains. Surprisingly the beaches were very clean and the area was probably the safest in Rio. Rio is a very active and health-conscience community. In the morning, people exercise all over the beach, along with jogging on the beach or boardwalk, you’ll find biking, surfing, personal trainers, beach volleyball games and lessons, and even foot volley – which is a combination of soccer and volleyball. There are even exercise stations near each “Posto” which are numbered lifeguard stands. The Millers were able to fit in beach volleyball lessons three days a week before work. It was a double lesson since all instructions were in Portuguese! Along with the lessons, they made great friends with the owner, Cynthia, instructor Alex and many of the students. They even had a going away treat from one of the students with Canjica – a variety of Brazilian white corn served warm with milk, sugar and cinnamon and crushed peanuts on the side.

Mark was able to watch wheelchair tennis during some of his volunteer time, and got to know David Wagner, from team USA. Nancy worked behind the scenes with the organizers. Although she didn’t get to work at a venue, she was given tickets to several events including the Opening and Closing Ceremony. The seats were actually some of the best in house, and included access to the Paralympic Family Lounge. The lounge ended up being a great place to get to know some of the leaders from each country, and learn a bit about how the organization of the games works.

The Millers’ were able to sync their schedules and attend several events on their time off. They watched Wheelchair Rugby, Women’s Triathlon, Cycling, Wheelchair Tennis, and Canoe Sprints (which were actually racing kayaks). There were so many more events they wanted to see, but it was tough to fit everything in. The venues were very spread out. The track and field events, for example, were across town, almost two hours away. 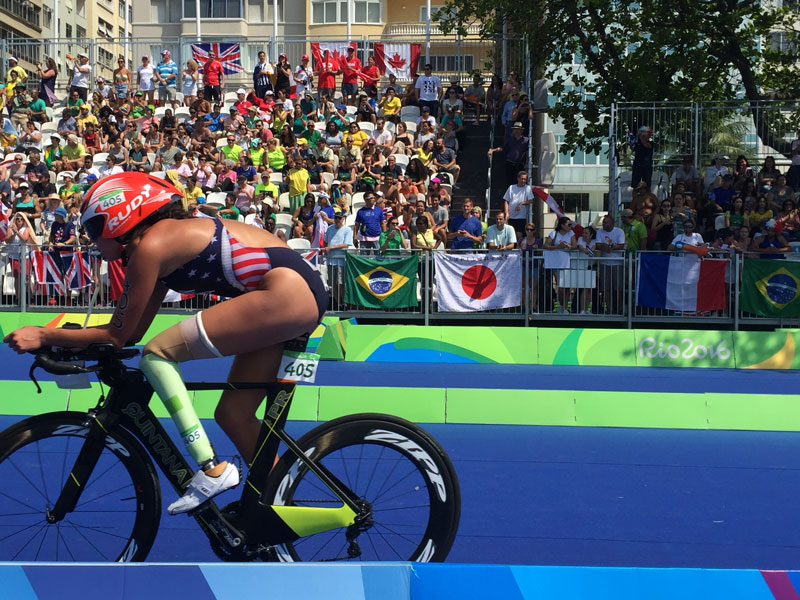 The athletes were absolutely amazing. Nancy said “the wheelchair rugby had serious bumper action, even overturned chairs and the wheelchair tennis players would easily beat me”. The United States women swept the triathlon, with Allysa Seely taking Gold, Hailey Danisewicz taking Silver and Melissa Stockwell with Bronze in the PT4 category, and Grace Norman crossing the finish line first, taking the gold in the PT2 category. The athletes are categorized according to their level of ability. The wins were extra rewarding in this inaugural year – 2016 was the first year the triathlon was an official sport in the Paralympics. The Millers also witnessed the inaugural canoe event and met the Kelly Allen, the USA female athlete after the race. They congratulated Kelly with a Keating Pirate shirt!

When asked what the best part of the trip was, Nancy replied “By far the best part of Rio and this Paralympic adventure was the welcoming nature of the Cariocas and all of the Brazilian people. (Cariocas are the proud people who are originally from Rio.) In all of the places we have been, we have never met more friends and felt more welcomed than we did in Brazil.” In fact, Nancy met Claudia originally through Air B-n-B and in person on Nancy’s second day in Rio, and now has a best friend for life! Along with Brazilians, they made new friends from all over the world! They were invited to the German House, and danced the night away on a dance floor filled with a good mix of Germans and Brazilians along with athletes, people dancing on their feet or in their chairs.

Trading pins is a key activity among people involved with the games. The Millers were prepared with pins of their own to trade. The “Keating” pins featured their amputee pirate dog with Carpe Diem, Ohio – WV, USA and their website. The pins along with similarly made Keating shirts were a big hit with everyone. They returned home with a new collection of pins from around the world and two athletic shirts from Ireland and Portugal. 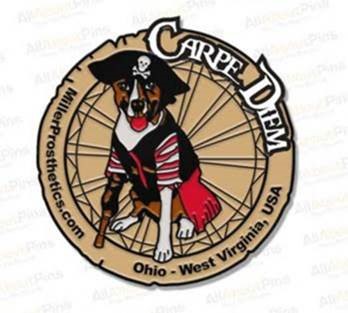 One sunny day off after the canoe sprint event, Mark and Nancy fit in some sightseeing. They took a train to the top of Corcovado mountain to see “Christ the Redeemer” up close. Christ the Redeemer (Cristo Redentor) is a statue that is two-thirds the height of the Statue of Liberty. There, on top of one of the new seven wonders of the world, they ran into Mark’s new friend, David Wagner, who just took the silver medal in wheelchair tennis. From there the Millers headed to Sugarloaf Mountain, where they took a cable car to both mountain tops. On the highest peak, they ran into more friends – this time, it was the NPC President from Ireland and his wife Jimmy and Catherine Gradwell. The Millers then found their way to an amazing bar/restaurant with an indescribable view and met the Mullen family from Scotland. Turns out their son Andrew Mullen swam for Great Brittan’s Paralympic team. The Millers were able to catch Andrew take the Silver in the 50m backstroke the next evening on Sportv and recorded the medal ceremony for them.

The last week Nancy was in town, she shopped for gifts for members of the Prosthetic Users Group. This group of friends with limb loss meets the fourth Thursday of the month at Shoney’s in Parkersburg, WV at 6:30.  Please spread the word to anyone you know with limb loss.
You can read more about their Paralympic Adventures and see photos at Millerpo.com – click on the “Rio” link on the top right. 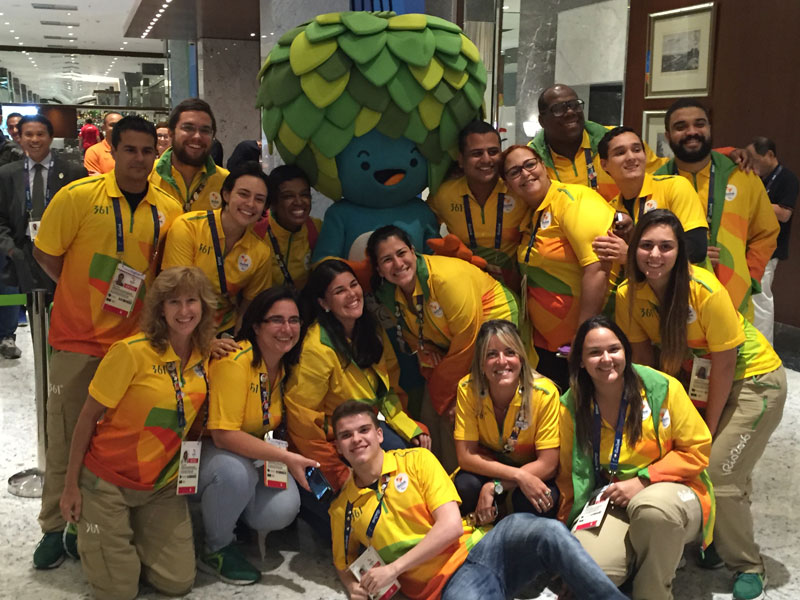