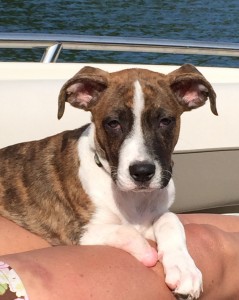 PARKERSBURG, WV (October 27, 2014) A puppy born with only three legs in Chattanooga, TN, now has a new home in Belpre, OH, with Mark and Nancy Miller of Miller Prosthetics and Orthotics, who adopted the mixed-breed puppy so they could continue to fit him with a prosthetic leg as he grows.

A prosthetist in Chattanooga fitted the amputee puppy with his first artificial leg and then began searching for a permanent home while the puppy waited in a foster home to be rescued. Enter Mark Miller, a certified/licensed prosthetist/orthotist who answered the Chattanooga prosthetist’s appeal. Once the Millers were approved to adopt the puppy, the local shelter arranged transportation to Wytheville, VA, where Nancy was waiting to take the Millers’ new puppy to meet Mark and their son Alex and enjoy a weekend outing at Summersville Lake in Summersville, WV. “We spent the next two days boating, camping and getting to know our new puppy, Keating,” Nancy said.

“We chose the name Keating in memory of Robin Williams,” Mark commented. “Dead Poets Society is one of my favorite movies because of the overall message and Williams’ character, Professor Keating, who professes the ‘carpe diem’ attitude with such passion. The night before Robin died, I had just watched the movie again, and we were in the process of getting the pup. The name is a bit unusual, but fits the puppy well. He also answers to ‘Oh captain, my captain.’ ” 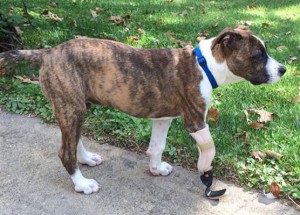 Although Keating gets along pretty well with only three legs, he runs fast and plays hard like any other puppy when wearing his prosthesis. The latest leg made by Miller is hinged, so that it’s easy for anyone to put the leg on without pinching the skin. According to Nancy, the first time Keating chased a ball across a tiled floor while wearing his artificial limb, the “thump, thump, thump” of the plastic hitting the floor was adorable. In fact, they almost named him Thumper.

Keating is a “congenital amputee” because he was born without a limb. Fortunately, he still has a joint in his right leg that helps the prosthesis stay on.

Mark emphasized that the entire prosthesis is a work in progress because puppies grow so fast. Each new leg has functional improvements over the previous design. The current prosthesis is only three weeks old and needs to be replaced already. The design of the last foot worked well most of the time, but he had caught it on extension cords, ropes on a dock, and struggled to walk through fields of long, flattened grass at the Wilds during the Spartan Race. Mark replaced the foot and turned the open end around, which corrected the issue.

The puppy’s new home was already adapted for a dog – it has a large fenced in backyard. The Millers’ previous dog had to be put down at age 13 early in 2013, but they had never adopted another dog until Keating came along. “It was worth the wait to find the perfect dog,” Nancy said.

Keating has such a good temperament and aptitude for learning that the Millers plan to train him as a therapy dog. In fact, the puppy is already working as he goes to the office with Mark every day. “Many of my patients are amputees themselves and can relate to the puppy,” Mark said. “They also see how Keating isn’t slowed down by his condition. “

On his most recent adventure, Keating joined the Millers on a trip to Richmond, VA, to an Orthotic and Prosthetic Conference, where he was warmly greeted by the clinicians and vendors, and especially adored by a recent bilateral amputee who was at the show demonstrating his hi-tech knees. Keating also received a couple small socks from another vendor to help his prosthesis fit more comfortably.

“For a puppy in the middle of a crowded trade show, he was quite calm and comfortable,” Nancy said. “At one point, he was sprawled out in the middle of aisle on his back just waiting for Mark to finish chatting with a vendor. “ 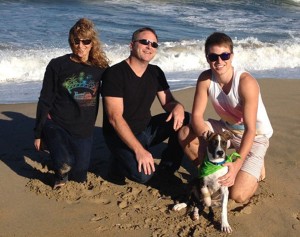 Outdoor enthusiasts, the Miller family often takes Keating boating, having him ride to shore on a knee board and cruise with Mark on a stand-up paddleboard. On his recent trip to Virginia, he saw the ocean for the first time. “I doubt he’ll be surfing anytime soon,” Miller joked, “he got sand in his prosthesis and was a bit intimidated by the splashing surf when trying to rinse off.” To read more about Keating, see more pictures, and watch a few videos – including the first “thumper” video, visit www.Millerpo.com and look for the Keating page. And, if you want to meet him in person, just stop by the office anytime.

Owner Mark Miller is a certified, licensed prosthetic and orthotic professional who has been helping patients walk comfortably and regain their confidence and dignity for over 25 years. Mark was born and raised in Marietta, OH, has a Bachelor of Science degree in Industrial Technology from Ohio University and received his certificate in Prosthetics and Orthotics from Northwestern University in Chicago. He has been practicing in the Mid-Ohio Valley since 1991.

Miller Prosthetics & Orthotics was established on Dec.12, 2012, by Mark and his wife, Nancy Miller. Co-owner Nancy Miller has a Bachelor of Business Administration degree in Finance and Statistics, and an MBA from Ohio University. The office is managed by Susie Murphy, who comes to Miller Prosthetics & Orthotics with over 25 years experience in the field.