What does Keating get when you cross Woodcraft with Miller Prosthetics & Orthotics?   A PEGLEG!   An authentic wooden leg, with a professionally made prosthetic socket! 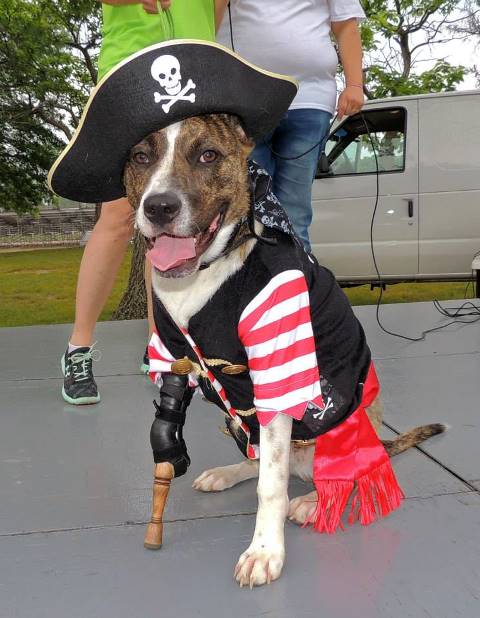 Keating is the 3-legged dog of Mark and Nancy Miller, owners of Miller Prosthetics & Orthotics in Parkersburg, WV.  Nancy is also the Head of Digital Retail at Woodcraft Supply. When the Humane Society of Parkersburg, WV announced their fundraiser would include a costume contest, Nancy instantly thought PIRATE and begged Mark to make a pegleg to go with the costume. When she questioned Mark on what type of wood was originally used for wooden legs, he said “willow wood”. In fact, he explained, that is where WillowWood, an Ohio-based Prosthetic company, derived its name. A quick search on Woodcraft.com showed that Woodcraft had willow wood in stock. The idea was so exciting, that Frank Byers of Woodcraft was eager to help. Frank actually found a willow stick in the office, and offered to make the wooden part of the leg!

The custom-fit wooden pegleg and costume came together at the Humane Societies “Walk your Paws” Fundraiser on Saturday June 6, 2015. The crowd fell in love with Keating as he joined the other pets in a lap around the park. His leg fit so well that he was able to easily run the path. He was also able to climb up and down the stairs to the stage, and won first place in the costume contest! His pirate treasure prize was a big basket of dog treats! 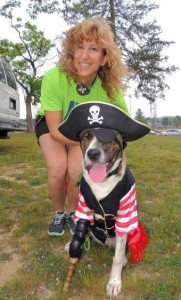 Keating with his eye-patch!

This was the 5th socket that Mark made for Keating, who is now one year old. Last year Keating was rescued by the Millers through MARC, an non-profit rescue organization in Chattanooga, Tennesse. Traci Kilmartin, a prosthetist in Chattanooga who made the puppy’s first prosthesis, reached out to her  professional network to find a good home for the puppy. Mark responded to the post, and soon the Millers took him in and made him part of their family. Now Keating usually goes to the office with Mark and has been very helpful to their amputee patients, especially those who have recently lost their limb. Keating is the happiest dog around, and doesn’t let his missing limb slow him down.

The wooden part of the leg was turned on a woodworking lathe by Frank Byers. He turned and finished the piece similar to a furniture leg, and made it long enough for Mark to blend it into the socket. After a day in the office of measuring and trying different materials, the wooden piece was incorporated into the socket with epoxy. Mark’s son Alex, who is also learning the trade, worked on the project and suggested the black leather covering to resemble a pirate boot. The leg turned out better than imaged! To see more photos and read about the production of the leg, check out the story on www.WoodworkingAdventures.com 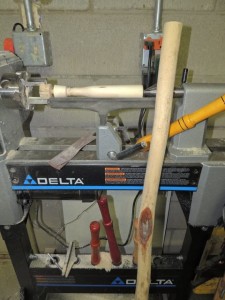 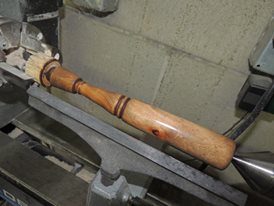 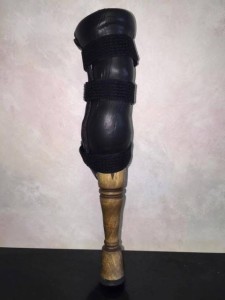 Thanks to Pat Catan’s, who had a pirate costume for toddlers, Keating was decked out and ready to go to the fundraising event.  The Parkersburg City Park venue was equipped with a cannon, for the perfect pirate snapshot! 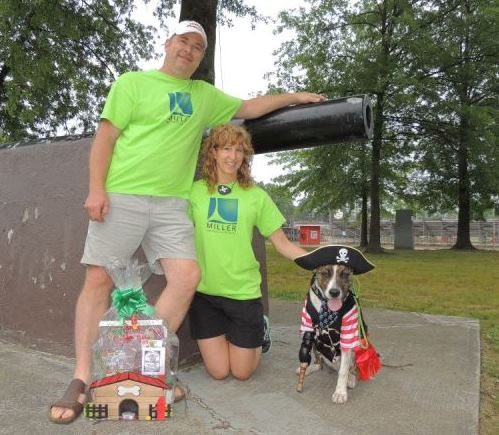 Keating poses with his owners, Mark and Nancy Miller, and his pirate treasure for taking First Place in the costume contest for the Humane Society’s Fundraiser

He may be one of the happiest dogs you will ever meet. In fact, you…

Congratulations Keating! Miller Prosthetics & Orthotics is proud to announce that Keating has graduated and…