Thanks to my manger Nathan, I was able to transfer to the International Relations & Protocol Operations Department. I still work in the hotel next door, but now it is in the lobby where all of the International Clients check in. They are the IPC, NPC and IF Presidents, Secretary Generals and Committee members. Now I will meet people from all over the world. Most of them, or at least their assistants speak English. So, it’s a better role for me all around! 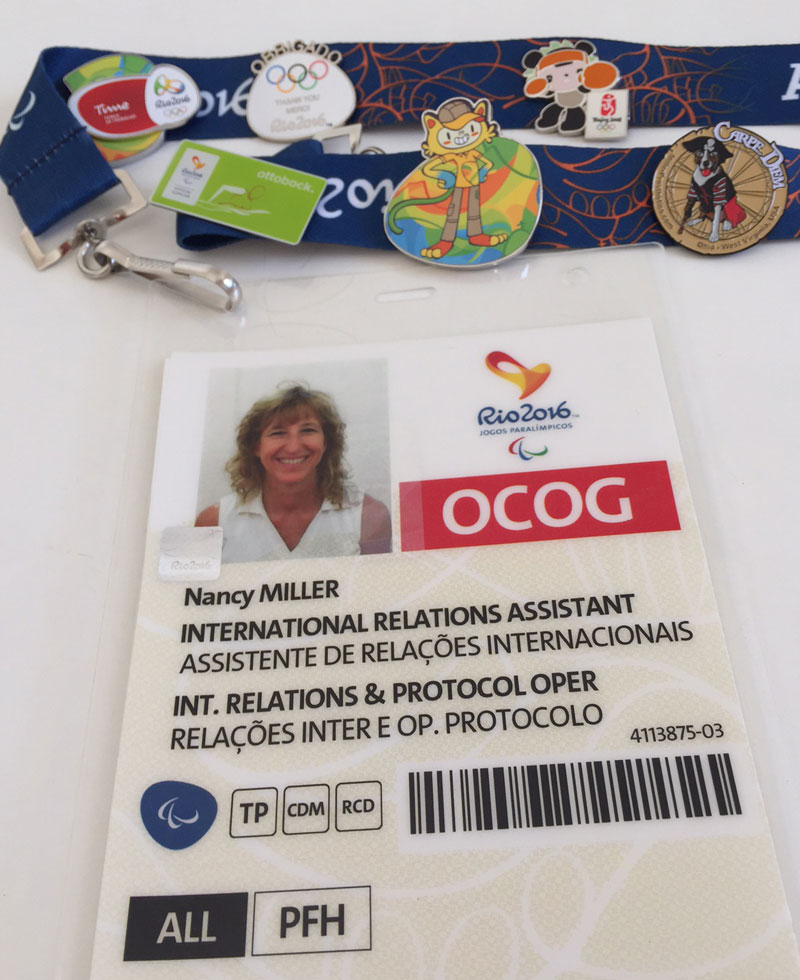 All clients receive a cell phone with a Brazilian number to use while they are here. Our job is to have them sign the contracts and to distribute the phones. Depending on their credentials, they will also receive tickets for the opening and closing events. We also distribute those tickets. We are actually labeled as the “Help Desk” for the Paralympic events. SO MUCH MORE FUN FOR ME!!!

My first day in this area was September 1. I was also able to change to the afternoon shift so that I could go to the volleyball classes.

When I arrived to work on Thursday, we had to fill out the cell phone contracts in advance. We had to transpose numbers from two lists and write a few times on the front and back of the contract. I knew I could do this easier and faster on the computer, but they only had 150 of 500 left, so I worked the day by hand. It took longer than I thought and it was really a good mind exercise for remembering numbers. When I left work that day, all of the contracts were completed.

The next day when I arrived at work, the team gave me the bad news that the contracts we used were from the Olympics and they all had to be redone on the Paralympic contract. This work had taken at least 3 full days with four people a day. The team was so stressed about having to re-do it all.

Now it was time for me to do it on the computer instead. I was able to run back to my apartment and get my own computer. They provided the data files in Excel and the contract in Word. I used Microsoft Access to combine the two data files and used Word-Merge to update all of the contracts. I gave a few lessons to the staff while doing it, they were very interested to learn.

It was a great success! No one had to rewrite the contracts by hand. We did give the printer a work-out though. Woo Hoo! I got a point on my second day!

I work with Marina and Gustavo who are both managers/paid employees. I also work along side a volunteer, Helena, from Brazil. They are all so intelligent, speak several languages and have also worked in the Olympics so really know the job. They are a lot of fun to work with! 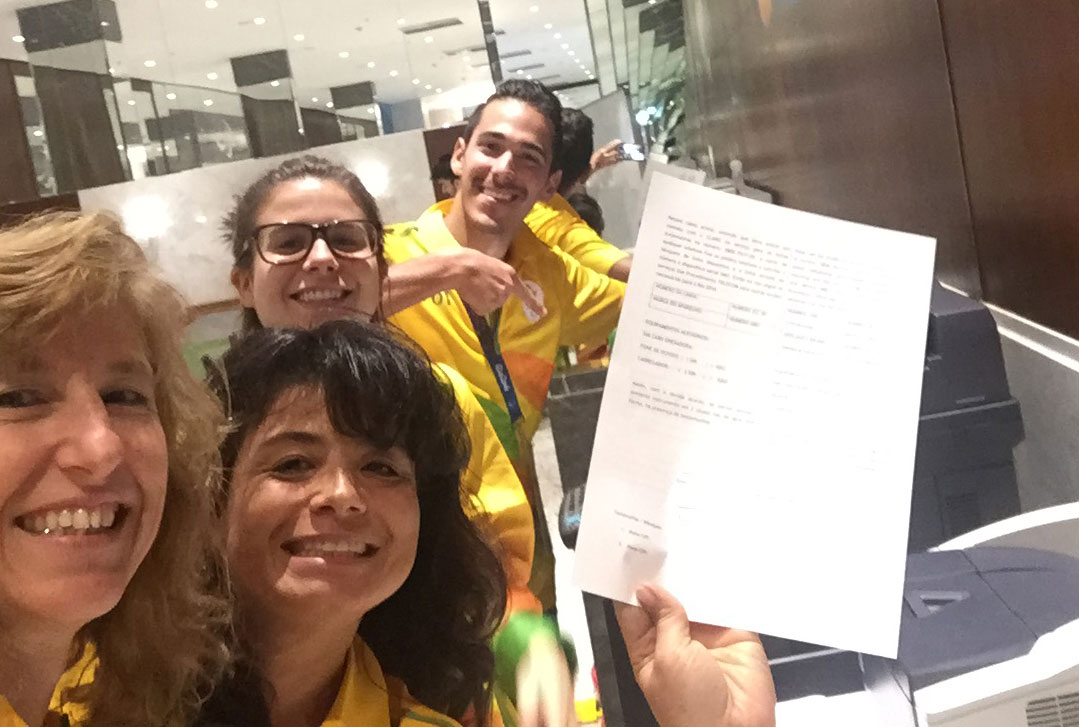 This is the selfie we took when we realized the Microsoft Word-Merge worked and no one had to redo the contracts by hand! Woo Hoo! 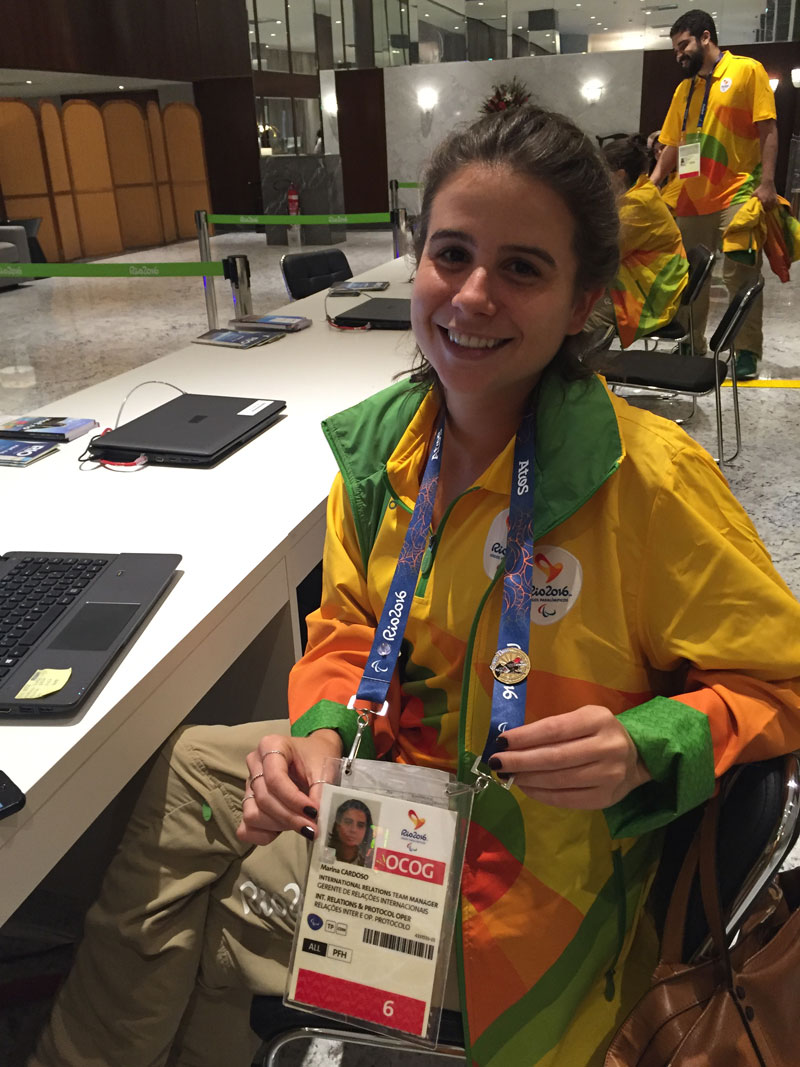 This is the evening shift manager/employee Marina. She is great to work with. Very organized and flexible with my schedule as I want to attend the opening ceremonies, How lucky I am to work with her! She is also showing off her Keating pin! 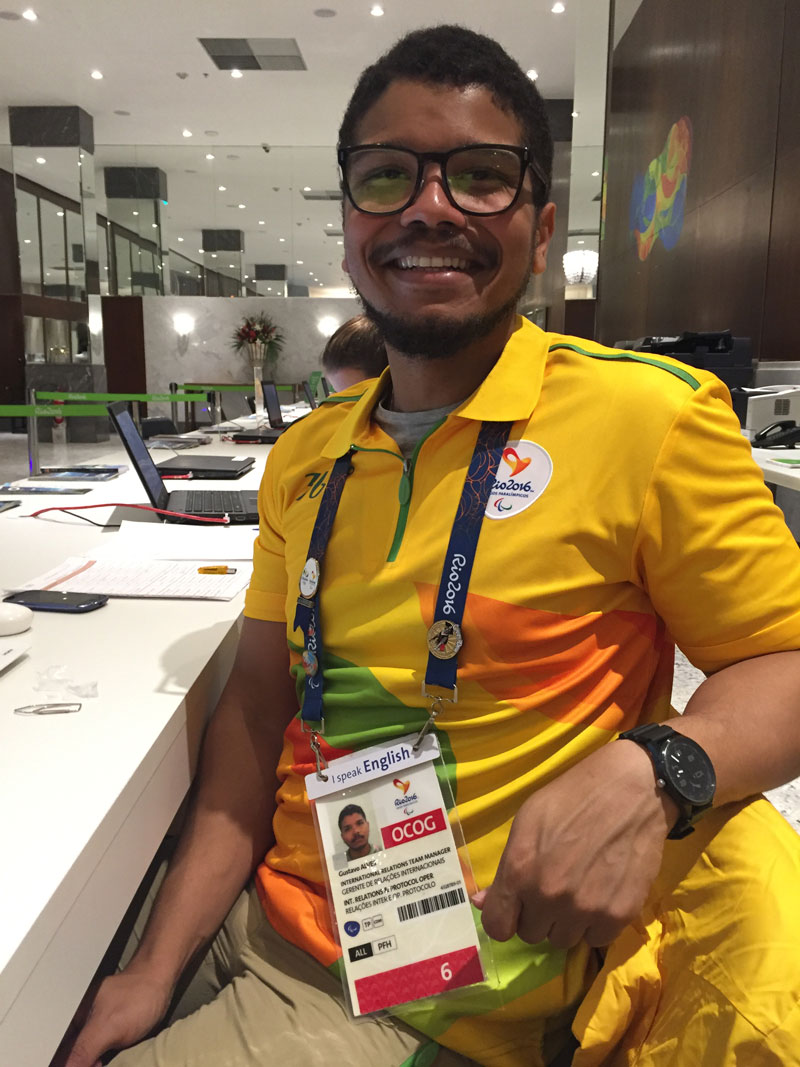 Gustavo – morning manager. He was instrumental in helping me work in his department. He is wearing his new Keating pin! 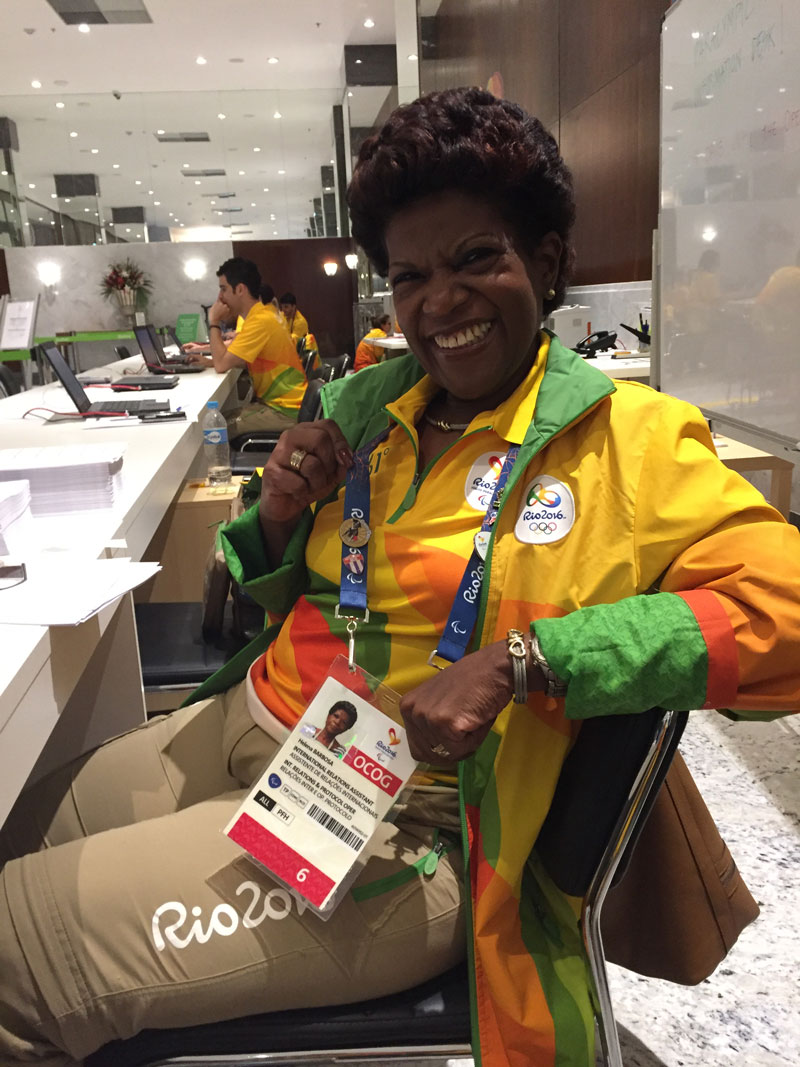 Helena is a volunteer and works next to me. I absolutely love her! She is also a lawyer, speaks several languages and worked for the Olympics as well. 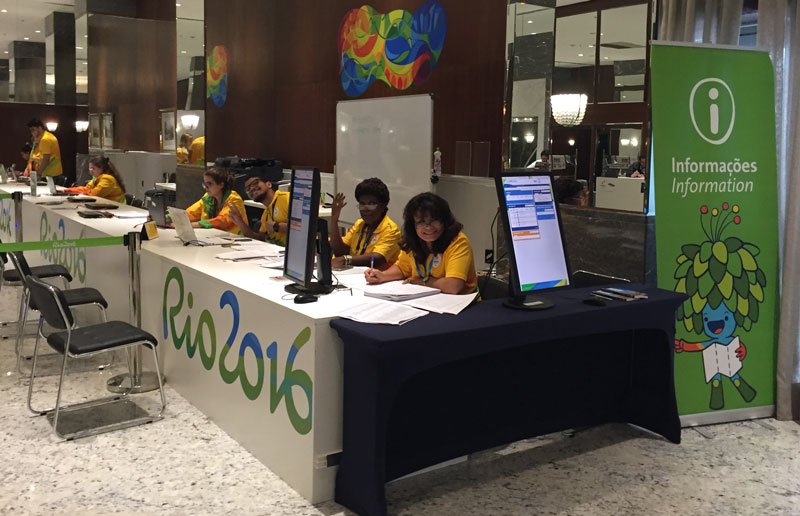 Here is the Help Desk where I work. It is in the Lobby of the Windsor. Very nice work environment, although there is not enough coffee 🙂 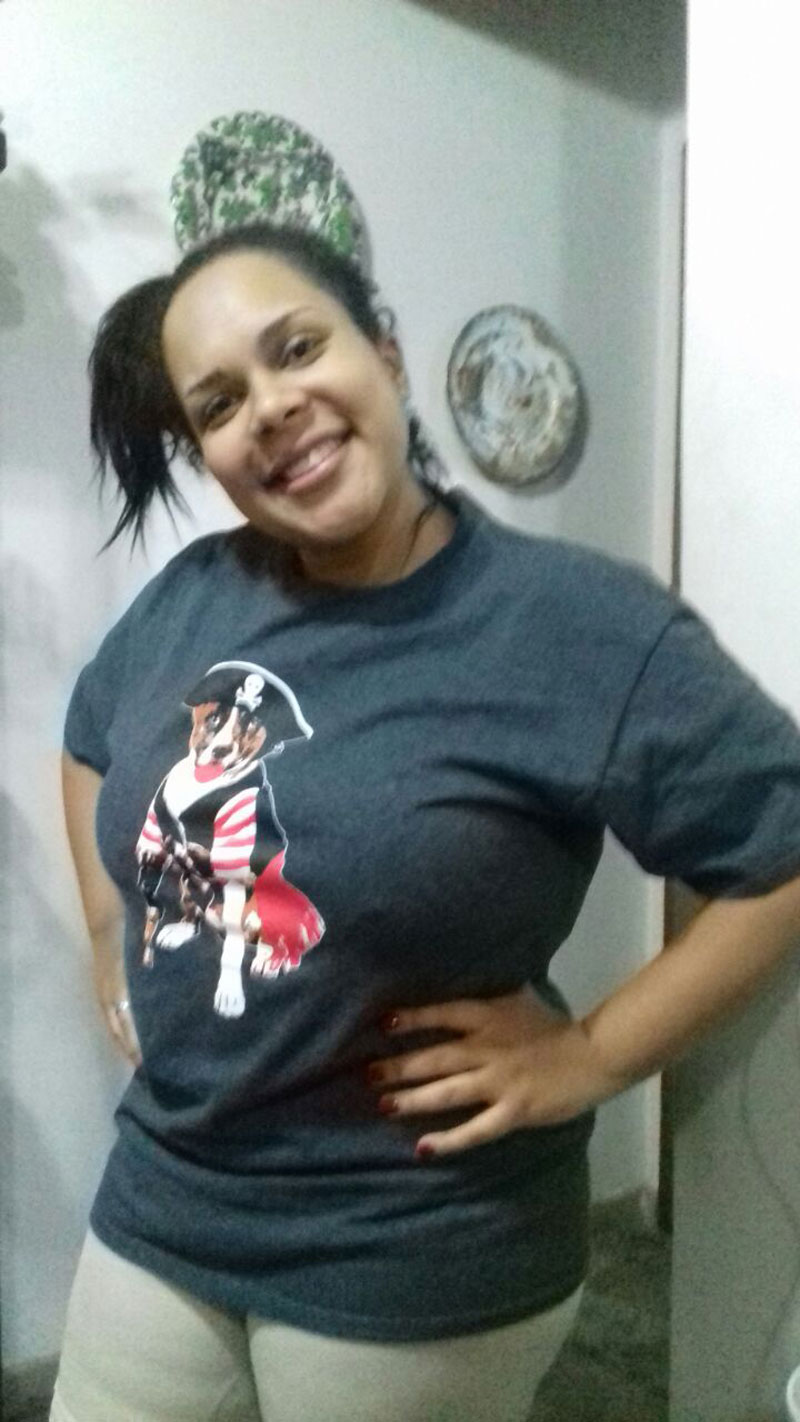 This is Helena’s daughter, Thayna. She was in a recent accident so I wanted to cheer her up with a Keating shirt. She looks happy, so I hope it worked!

Here is the Paralympic Log o in the lobby. It also vibrates slightly and may make a slight sound for those who are visually impaired. 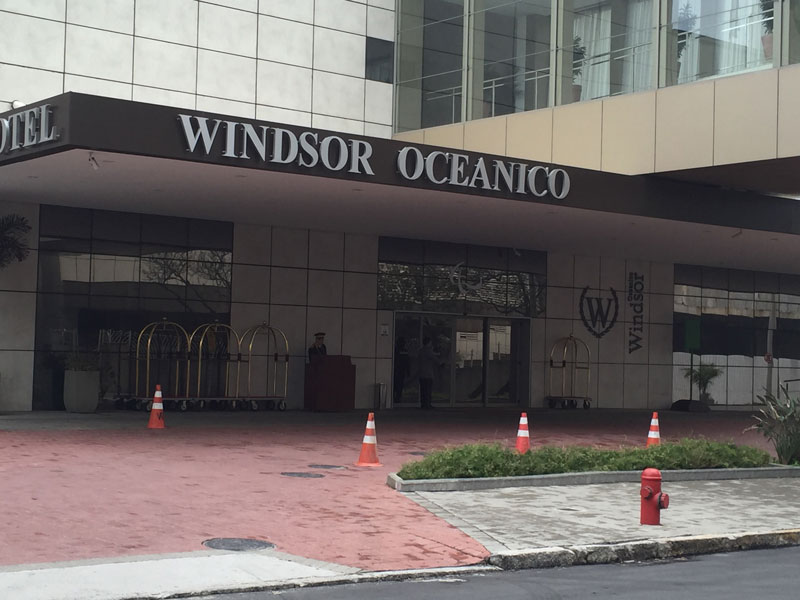 This is the hotel where I work everyday. It is a 3 minute walk from my apartment!