As soon as I established my volunteer schedule and found that I could take time off for the opening ceremony, I tried to purchase tickets. Unfortunately, the first two tiers were already sold out, and the prices were getting a bit expensive. A few volunteers said to hold off on the purchase because they all received tickets for the Olympic Opening Ceremony and there was a good chance that we would get them for the Paralympics as well. The risk was that you had to wait until a few hours before the event, but it was worth the risk because they would be very good seats.

I took the risk. I waited. At 3:00 that day, my dream of getting a ticket came true! Our team as well as the other volunteers in our area received VIP tickets, which included access to the Paralympic Family Lounge with complimentary food and beverages. Travel to the Maracana for us should have been by the metro (subway). However, we were lucky enough to board a very comfortable bus for the 45 minute ride to the stadium. We could not wear our work uniforms, so I ran home to change and grabbed a Keating pirate shirt for Helena. We jumped on the bus and were on our way to the ceremony to join all of our clients. 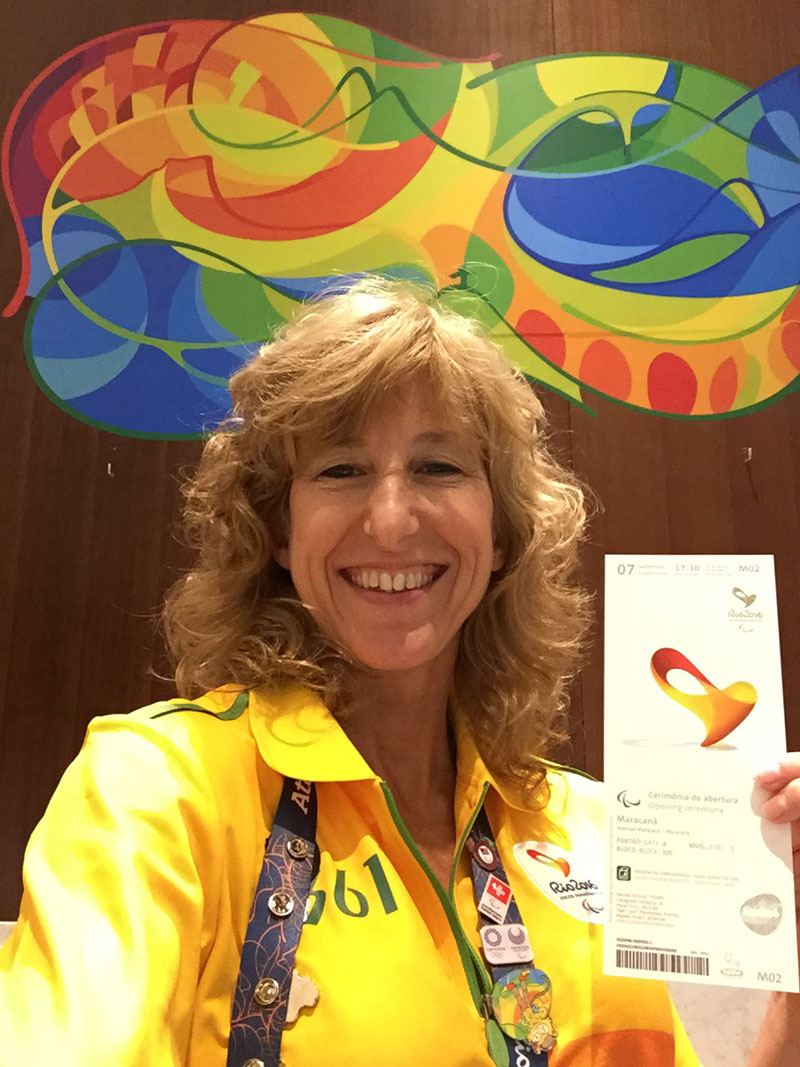 My VIP ticket for the Opening Ceremony! 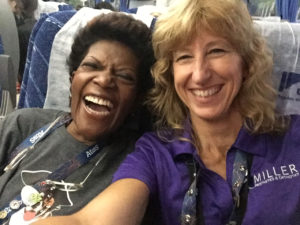 Helena and Nancy happy to be on the bus!

The show kicked off with an incredible stunt when extreme wheelchair athlete Aaron ‘Wheelz’ Fotheringham raced down a six-story high ramp, jumped through a giant hoop and landed on an inflatable mattress.  At that same moment, fireworks exploded from the top ring of the Maracana stadium and the party began.

There were many great performances and the crowd was alive with energy. As each country paraded through the stadium, they carried a puzzle piece. My heart was filled with pride when TEAM USA entered the Maracana carrying our flag. For their entrance, I made my way down to the front row. When the last puzzle piece was place, the puzzle turned into a beating heart, with the entire place feeling the vibrations from head to toe with only red lights pulsing and filling the air.

Amy Purdy, an American athlete who won bronze in the Sochi 2014 Winter Paralympics snowboarding and grew to fame from Dancing with the Stars, performed a samba dance with an unusally graceful robot. At one point, the robot even lifted her four feet off the ground. Amy lost both legs below her knees and performed her dance wearing her prosthetic running blades. (It is still my goal to meet her while I am here. We have posters of her from Dancing with the Stars in both of our offices.)

There was also an amazing video of fathers with their paraplegic children wearing special suits with boots to enable their kids to walk with them, and even play soccer (football). Chills ran through the crowd when children with their fathers from the video carried in the Brazilian flag.

More emotion filled the air when the Paralympic Torch entered the stadium. It was passed through several athletes. While carrying the torch, Marcia Malsar, a 1984 gold medalist – who was the first Brazilian ever to win gold at the Paralympic Games stumbled, fell, and dropped the flame. She was helped up by the assistants on the field and picked the torch back up. The crowd exploded to their feet with applause as she overcame the fall. The last person to take the flame to its home for the game waited at the foot of the stairs while they transformed into an accessible ramp for his chair. He made it up the ramps, lit the flame and the games were officially opened.

I can’t even explain to you the excitement I felt to be a part of this world event, and to be of the team that is making it happen. Along with the performances, speeches and athletes, we had access to the Paralympic Family Hospitality lounge. Since I have been working with my team and with the clients for over a week, I knew many people in the lounge. It was a great meeting place, and I even exchanged a few pins.

A panoramic shot of inside the Maracana. We sat in the section of seat in the middle of this picture. 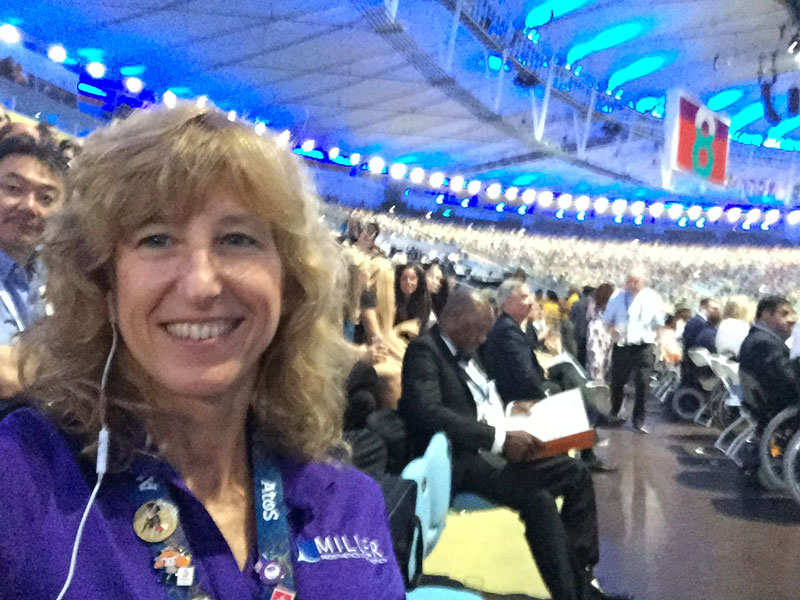 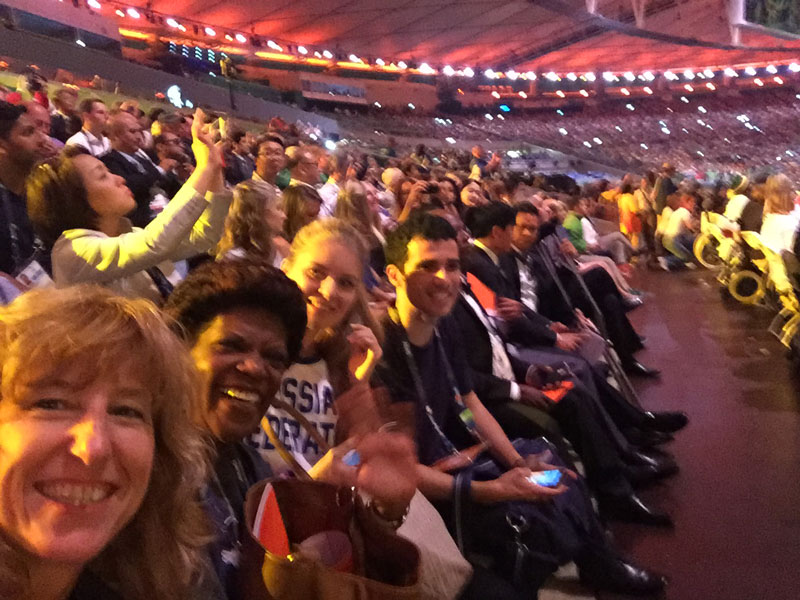 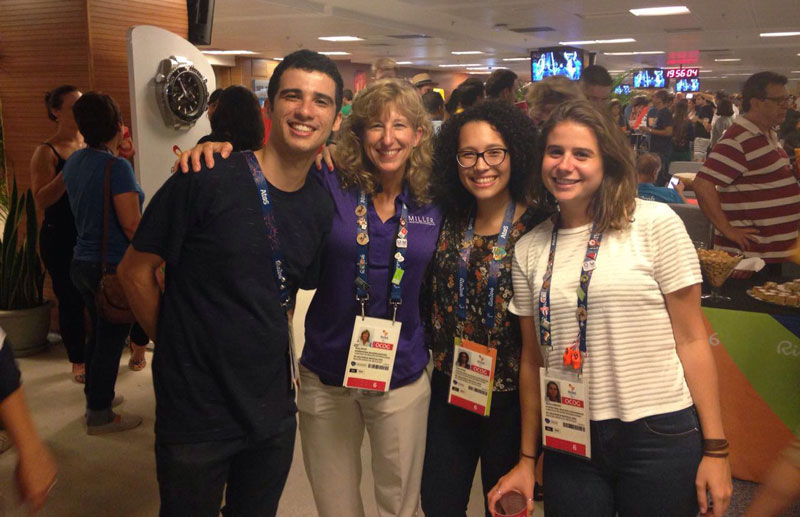 My team met in the lounge! Renan, Nancy, Giulia, and Marina. We are in the International Relations & Protocol Operations 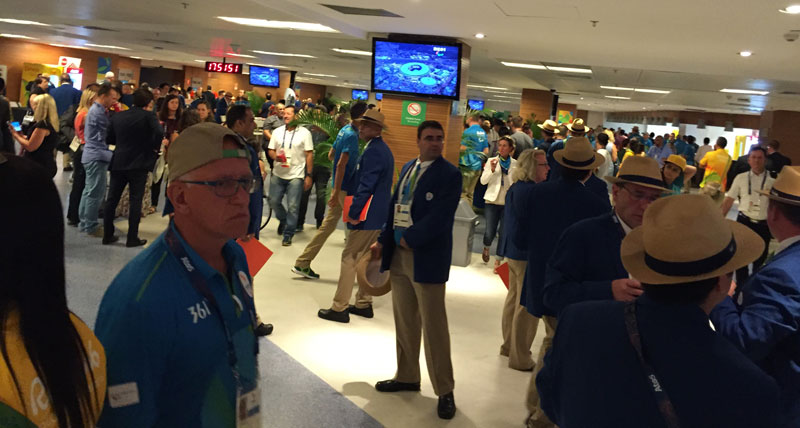 Rain was in the forecast, but held off until the end. Fortunately it didn’t put out any of the torch flames! Helena and I headed out with the crowd and made our way back to our comforatable bus for the ride home.

The games have officially begun!!!!

You can stream the games live from http://www.teamusa.org/