The only way in to Paralympic Village is with special credentials, which we did not have. But…on my way to Rio trying to tie up loose ends at the airport before leaving the country, I spoke with Crystal Schultz from Ottobock about our account. I mentioned that I was on my way to Rio, and she informed me that Ottobock (who is one of our prosthetic manufacturers) is a major sponsor the Paralympics. They set up a repair clinic with a full lab in the Village, and have several satellites clinics at each venue. This year they brought in 100 technicians from 31 countries to cover 26 languages in order to repair or replace prosthetic limbs and wheelchairs all at their own expense. You can read more about Ottobock’s deep involvement with the Paralympics on the Ottobock website.

Crystal was so proactive and quickly connected us with Adam McPherson at Ottobock who did a lot of leg work to arrange a tour of their repair center in the village. (Thanks again to Crystal and Adam for all the work you did for us!)  Adam put us in touch with Matt Swiggum, Executive Vice President of Sales & Marketing at Ottobock, who was in Rio and was scheduled to meet us on Saturday at 1.  Although Matt couldn’t make it, he made sure his team took care of us, which they did.

At the Village, security was tight as expected. We had to submit our passport information in advance, which was matched with our passport that was held at the Village while we were inside. We were greeted by Beate Hilpert, from Ottobock’s German headquarters. We immediately encountered an athlete from Germany, Felix Streng, who had just won the bronze medal for the 100 meter dash! 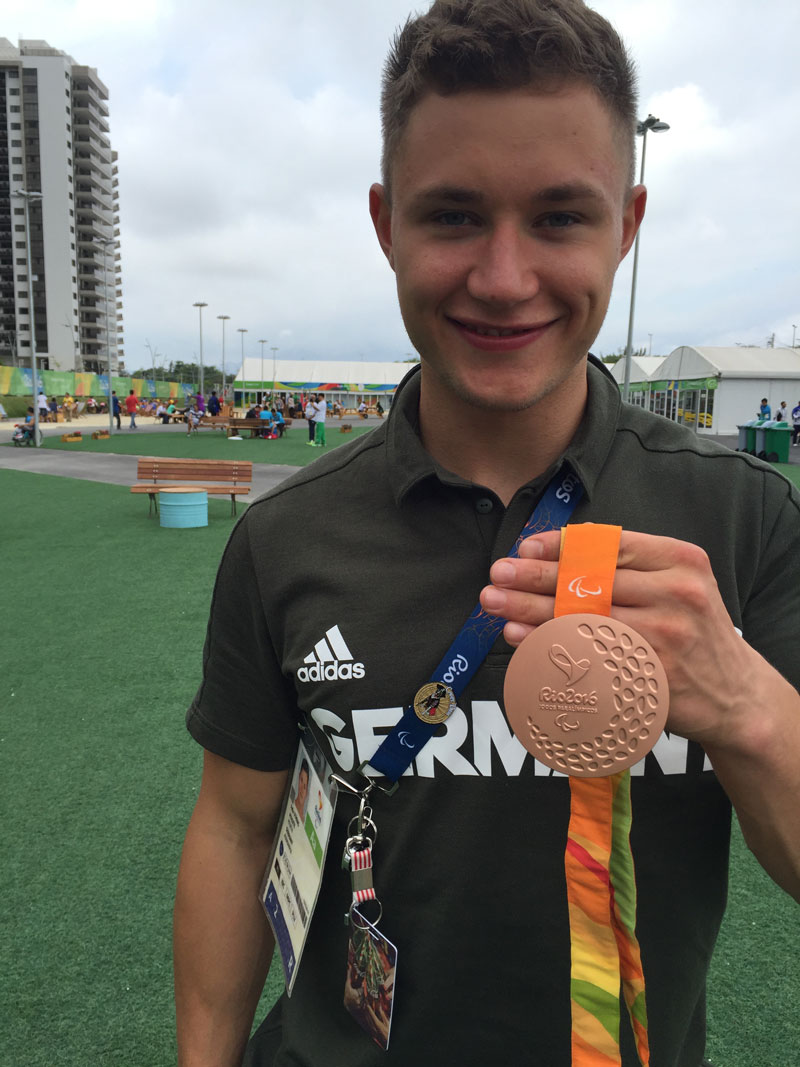 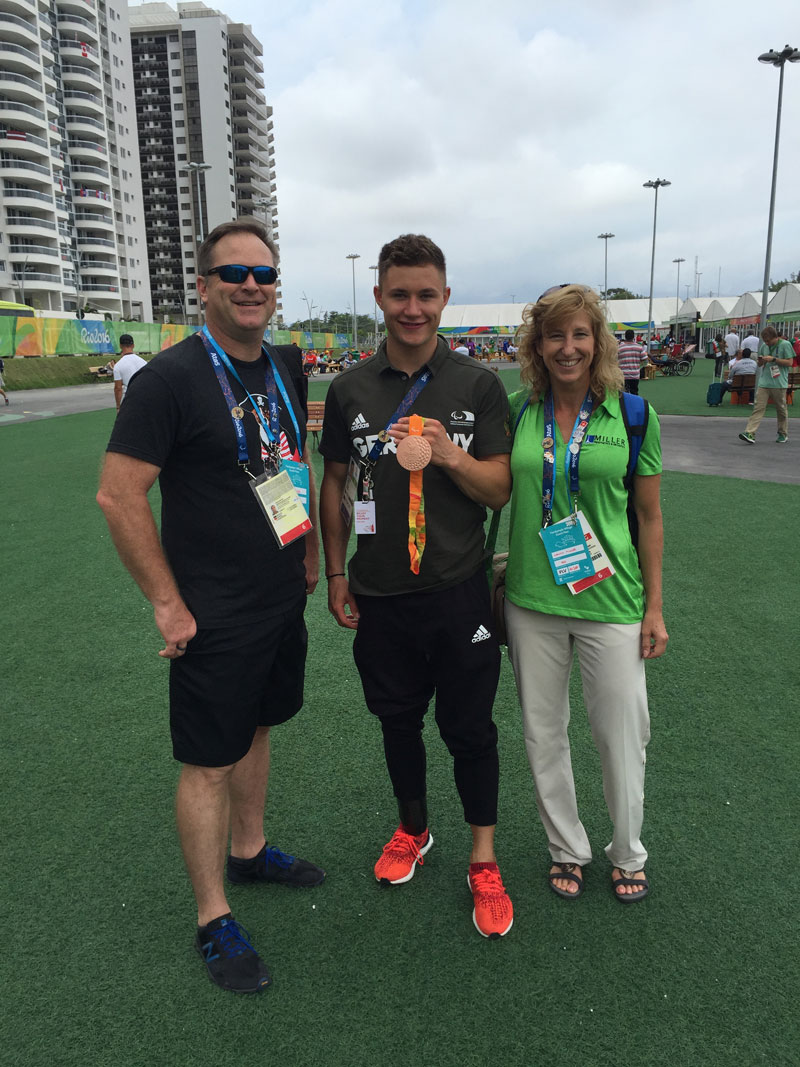 Mark, Felix and Nancy. Each medal also makes a different noise for the visually impaired.

Beate then took us through the village to the Ottobock repair clinic, which was set up in a section of the dining tent. There we met Christin Gunkel, Chief Marketing Officer for Ottobock in Germany as well. 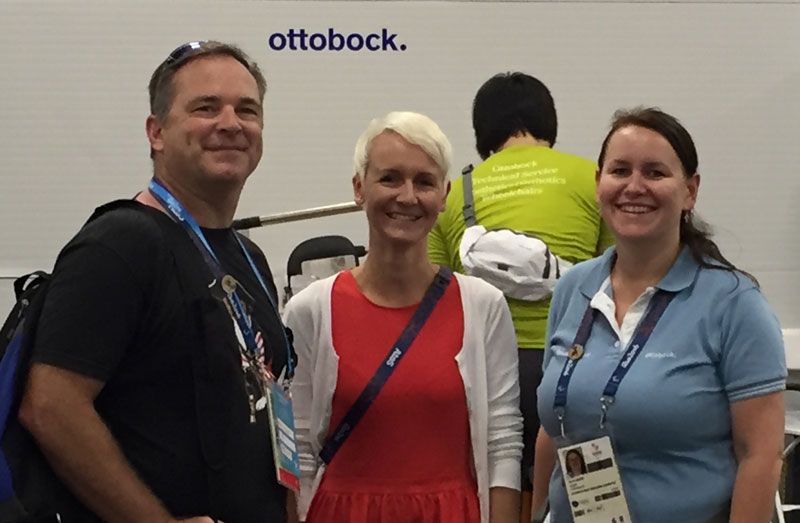 Christin described the wheelchair repair process and area, the private fitting rooms, and the technicians lab. Ottobock technicians are not permitted to improve the athletes current equipment, they can just repair or replace of components of equal value. Ottobock has a complete lab, with all of the tools and inventory necessary to enable the athelete to compete if their equipment fails for some reason. Ottobock even stocks components from competitors in order to complete server the athletes.  The investment Ottobock puts into the Olympics is incredible. We thank them for all they do for the athletes. 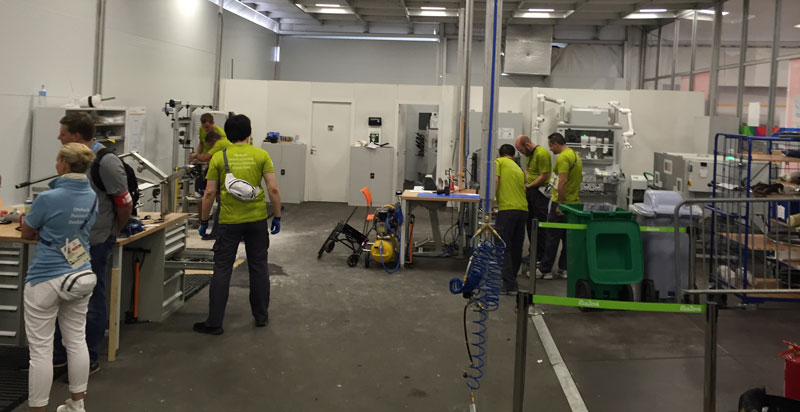 The Ottobock Workshop in the Village. 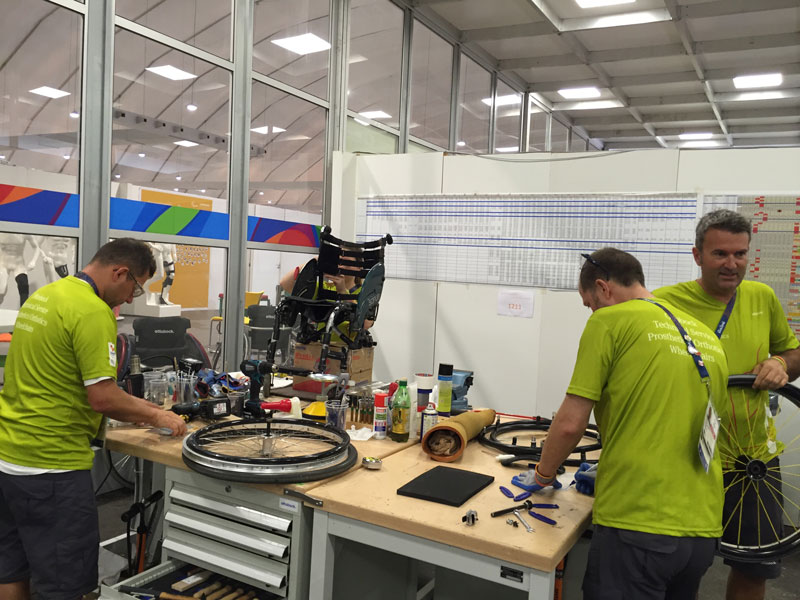 Wheelchair repair in action. Ottobock also provides loaner wheelchairs, which are often much better than the originals and are used throughout the games.

After the tour, Mark and I explored the village a bit. It was lunchtime, so everyone was walking our way. We ran into some of the USA staff.  Here you see people from all countries with an range of activity limitations from limb loss to blindness. The village was built to be accessible for all athletes, although some of the bridges would be a challenge for me if I was in a wheelchair. 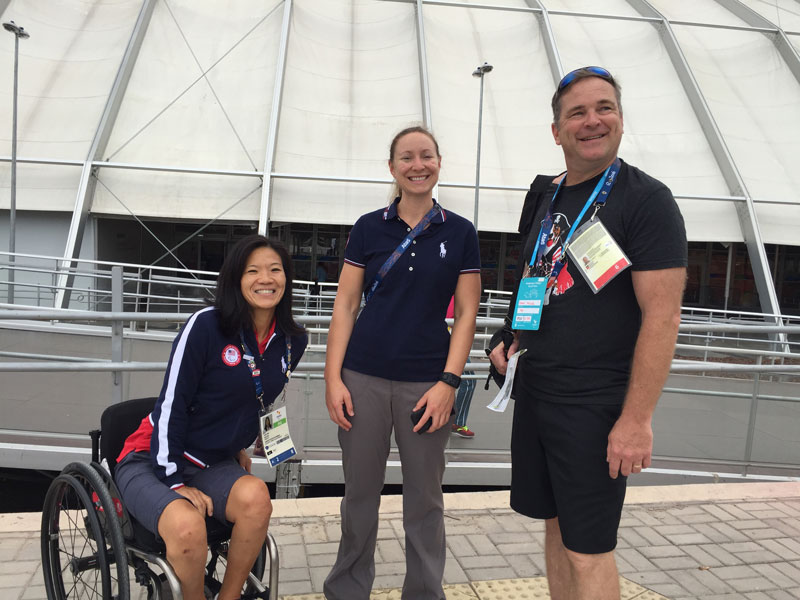 The village was built for the Olympics and Paralympics. It consists of high rise apartments to hold around 18,000 atheletes, officials and trainers. There are also a series of large tents set up for Dining, Medical, Gym and offices. Flags from each country lined the main road, and the apartments were separated by a grassy park with logos and statues for great pictures.

Panoramic view of the village. 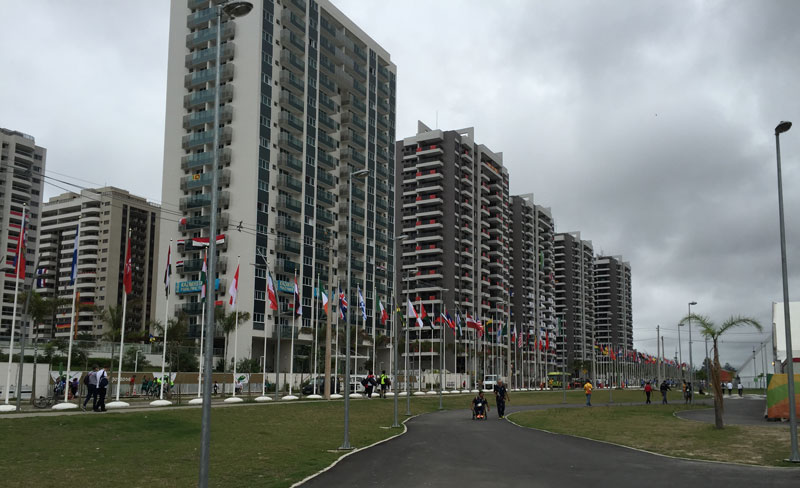 A few of the row of flags and apartments for the athletes in the village. 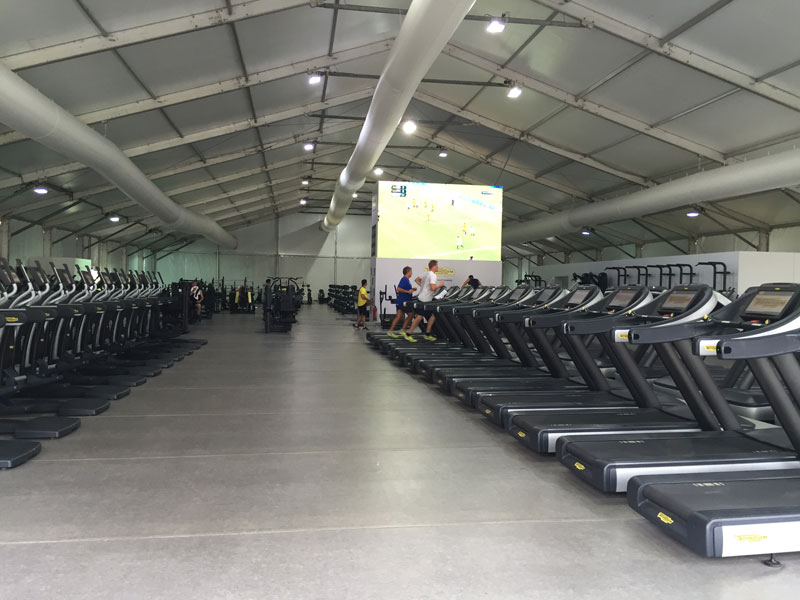 The athlete’s gym in Paralympic Village.

Mark and Nancy at the entrance into Olympic and Paralympic Village.

Nancy and Mark in the park area of Olympic and Paralympic Village.

Thanks again to Crystal, Adam, Beate and Christin for the tour of Ottobock and the Paralympic Village. Mark and I really appreciate the unique opportunity. The village is something that even my colleagues who worked during the Olympics were not able to visit.

Thank you and congratulations to the athletes for their incredible drive, fitness and for the motivation they provide to everyone worldwide.